New Figure Paintings and Conquering My Fear of Failure

Category: Blog, In the Studio, Painting

Since I began drawing as young as I can remember, I thought the pinnacle of being an Artist (with a capital A) was being able to render the human figure realistically. As a child growing up, the only “art” in the house were religious images. Growing up in small town Iowa, I don’t remember seeing any kind of figure paintings in art except religious iconography and traditional representational landscapes.

It wasn’t until I “escaped” to the other side of the state, to the thriving liberal metropolis of Iowa City and the University of Iowa School of Art and Art History, that I discovered an entirely new world. A world of abstraction, expressionism, dadaism, cubism, and all the other art-isms poured into my eyes and flooded my brain with questions about what is Art? I dove into the possibilities of being able to freely create images and objects that didn’t have to look like photographic replicas of the subject.

Down the aisles and upon the shelves of the art school library, I stumbled upon the works of Robert Longo, Eric Fischl, Paul Gauguin, Chuck Close, Julian Schnabel, and Jean-Michel Basquiat. As well as contemporary photographers like Cindy Sherman, Robert Mapplethorpe, and Diane Arbus. Toss in my discoveries of Pollock, Motherwell, Rothko, and de Kooning and the possibilities for personal expression became not only unlimited, but also somewhat overwhelming.

Flash forward 25 years and I find myself now deep in the process of developing my own artistic voice. While my paintings have generally followed inspirations from Gerhard Richter, Pollock, and Rebecca Crowell, I’ve still wanted to be a figurative painter. I work with figures and models in my photography — especially my new “Pixel Push” series (more of those coming very soon.) But I’ve held myself back from painting figuratively.

Why? I dunno. Probably fear of failure. Not wanting to fail at something that I believe I’ve wanted to be/do for so long. As a younger person, I felt it necessary to be invested in my efforts. Now, I prefer the creative freedom of not getting invested in the results of what I do.

So something happened during my most recent trip to Santa Fe (July 2015) and I simply decided, “Fuck it! I’m going to try. What’s the worst that could happen? If it doesn’t work or I fuck it up and I’ll just gesso over it and start again with my little abstractions.” 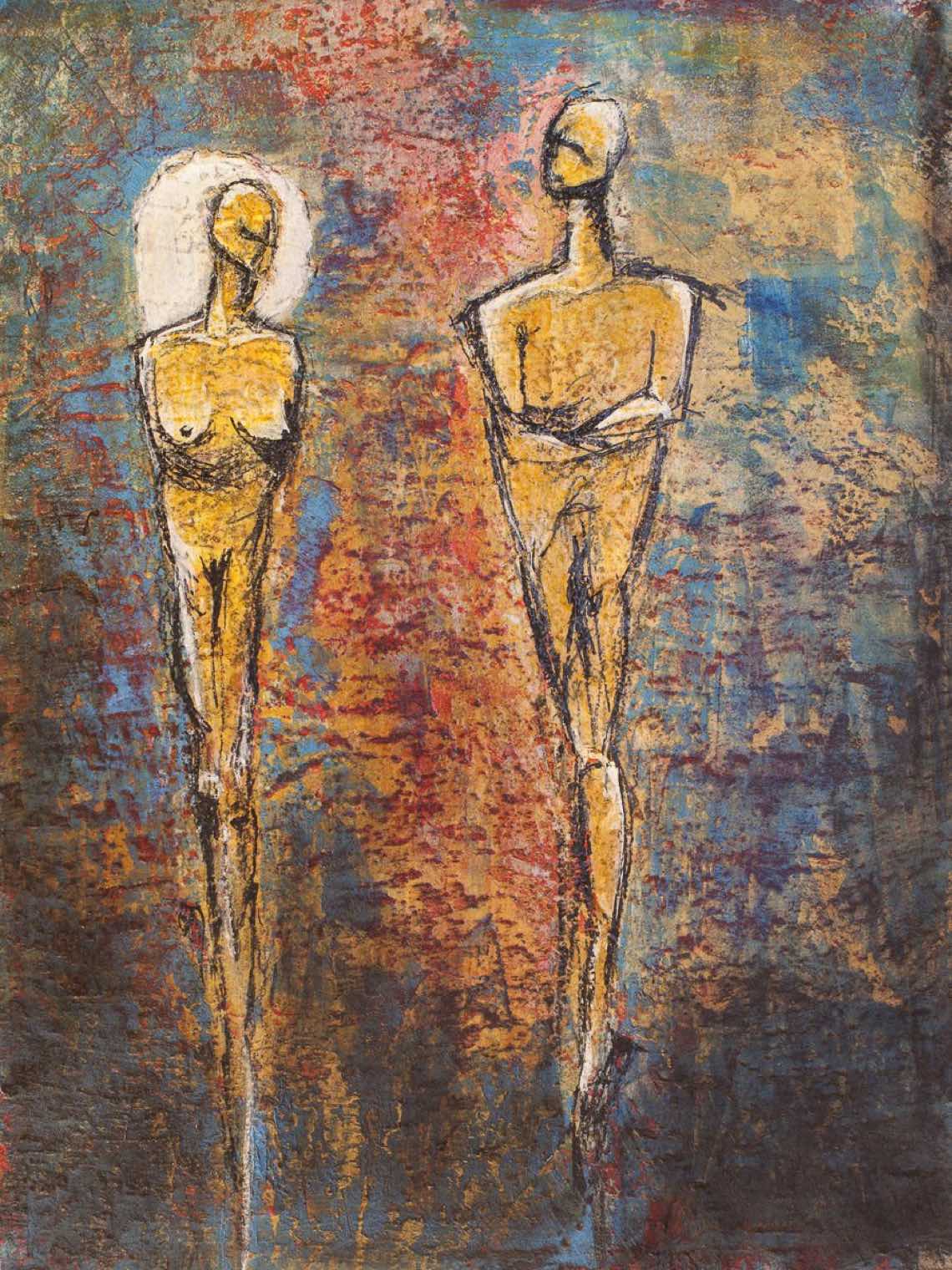 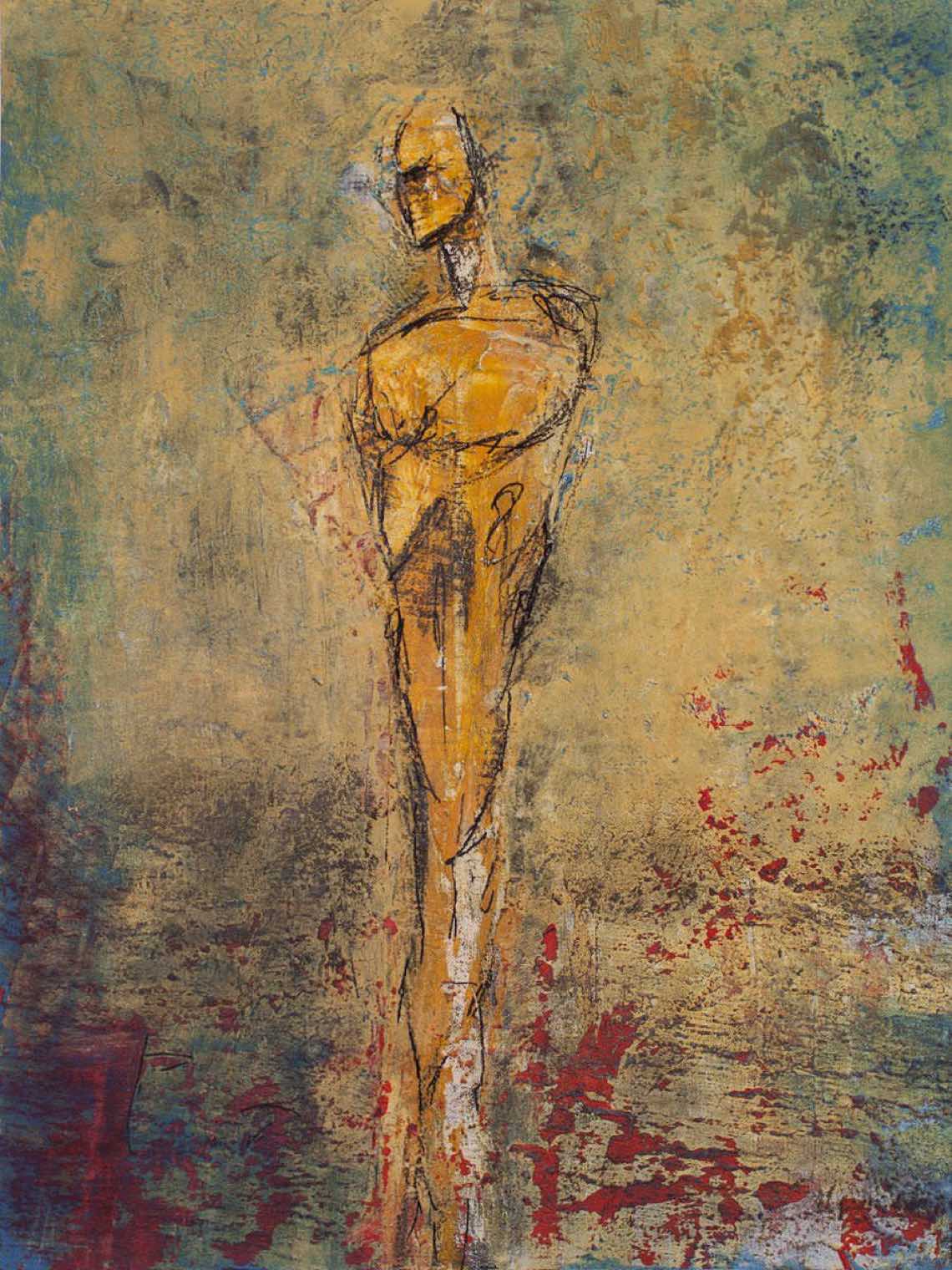 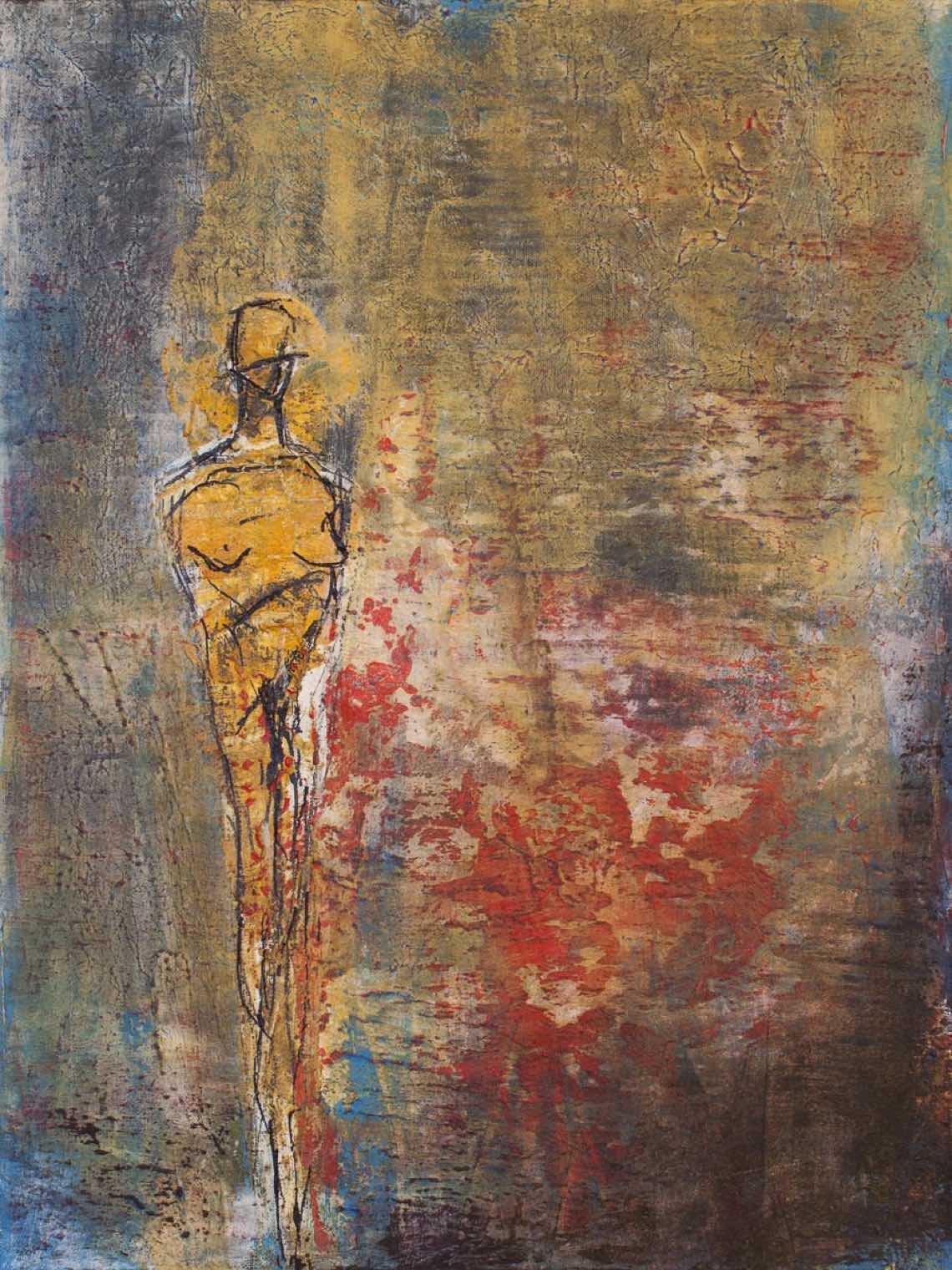 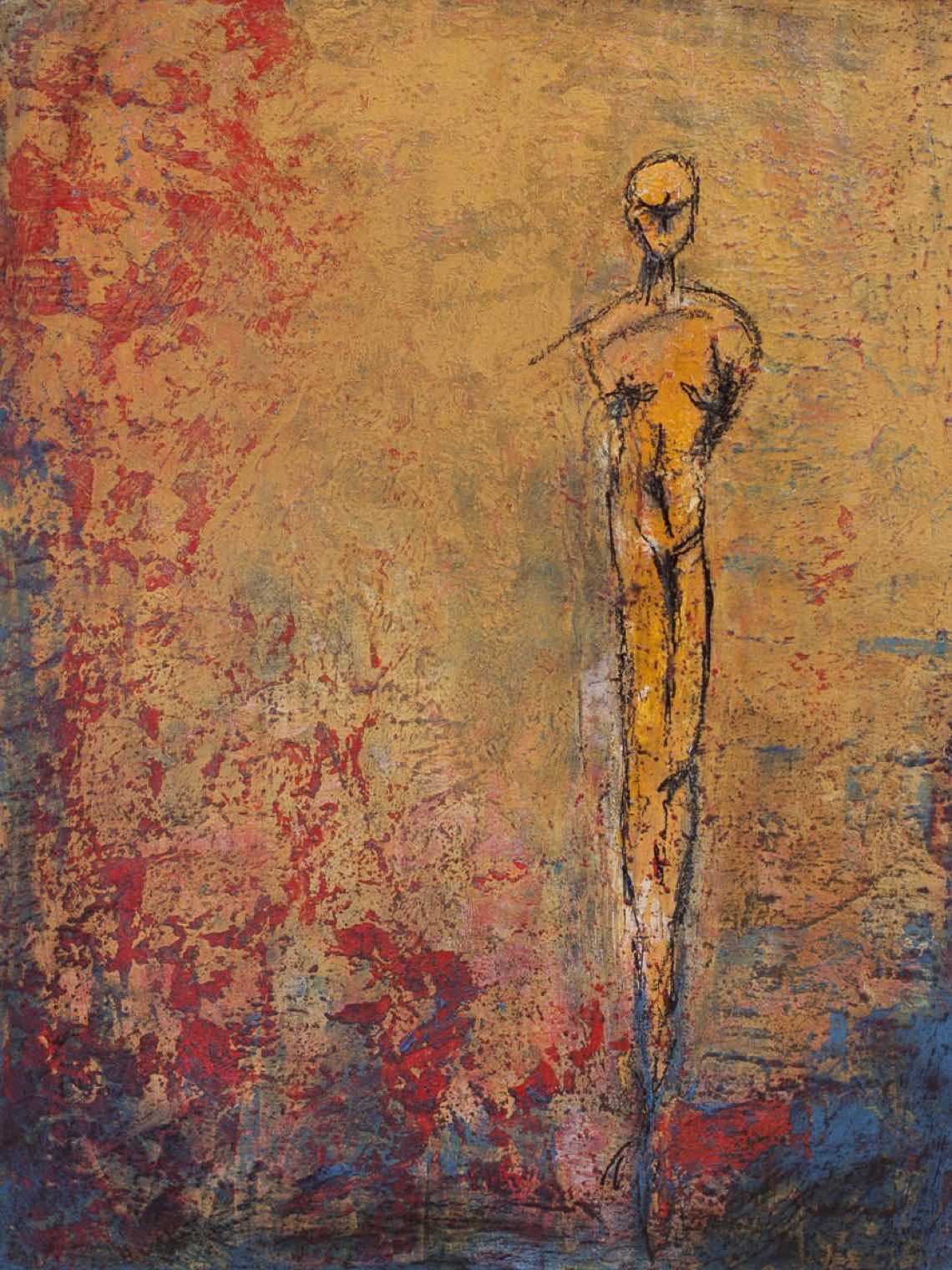 I really love these first little figures. They’re simple. Faceless. Abstracted. But they each somehow have their own personality. Their own story. They each have a Title. I didn’t have to labor over it, which, by the way, is one reason I tend not to title my work. They each just whispered their Title to me.

Now, about the new figurative work…

When I closed my studio a few months ago, I took my stock of wood and made 240 small framed panels, a few dozen of which I shipped to Santa Fe. I also had “sheets” of primed canvas available in “pads” at 18 inches wide by 24 inches high. So I laid out a new workspace in my Santa Fe loft, not knowing what, if anything, would come of it.

I’ve enjoyed moving back and forth between the different sizes and different substrates, while having the same ‘figure focus’ dance between the individual pieces.

I begin each piece by doing quick “body scribbles” with ink directly on the primed canvas or panel. A shoulder. A hip. Tilt of a head. Then expand the rest of the body from there. At this stage I have no thoughts of colors, textures, title, or meaning. Just attention on the various shapes, sizes, and positions of the figure. The ink forces me to commit. If I used pencil I know I would be tempted to erase and/or edit during the scribble process. I also use the ink at this stage to do a bit of shading and volume creation, giving the characters dimensionality.

Next are the first layers of color and texture. It’s important to me that ALL the texture is actually color. I don’t lay down a bunch of texture using just thick white mediums (thick paint goop without pigment colors) and then paint on top of that. Because I know it’s possible (actually highly probable) that I’m going to be doing some sanding, scraping, and gouging I want the color to remain throughout those destructive processes, and not just reveal a white base under the surface color.

I also mix my acrylics, inks, and pastels with transparent liquid mediums (liquid paint goop without pigment colors) and after dozens and dozens of layers, a translucent depth appears that just can’t be captured in photographs. You can actually see BEHIND some of the colors to what lies beneath…

These first finished pieces are almost a couple weeks old now and I’m STILL finding interesting little corners, layers, and expressions that I hadn’t seen before. 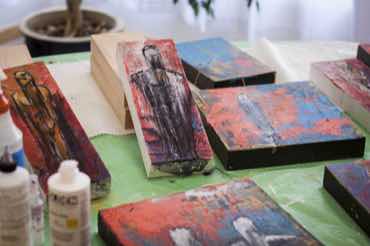 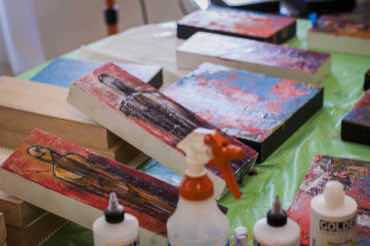 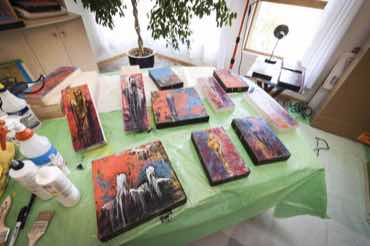 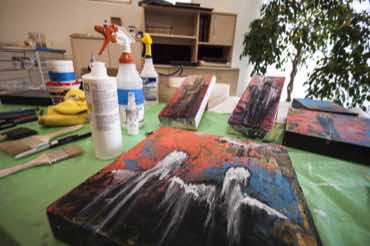 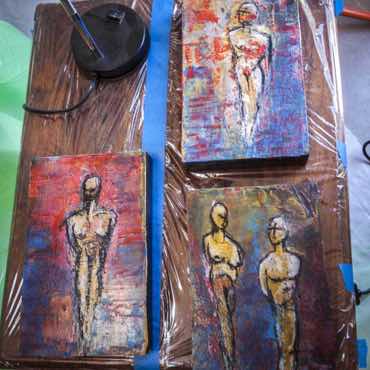 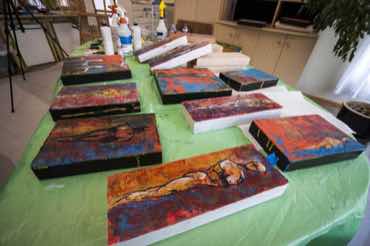 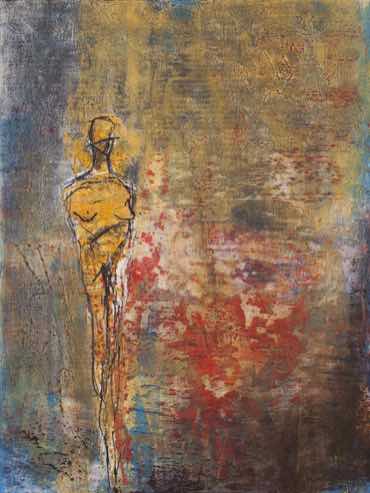 She Always Assumed the Shadow Was Hers... 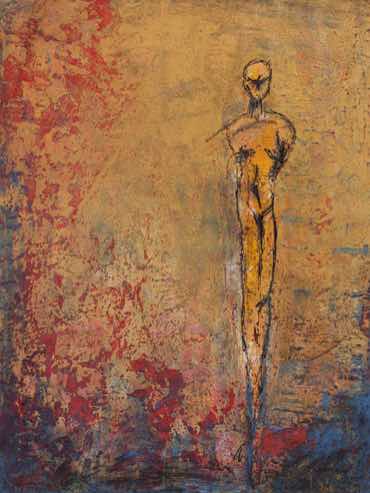 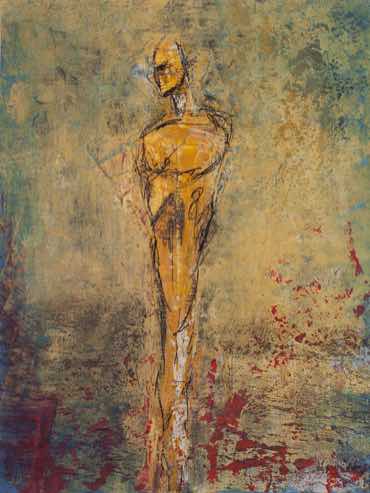 Master of All He Surveys...or So He Was Told